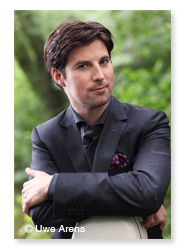 
Daniel Müller-Schott is one of the most sought-after cellists in the world and can be heard on all the great international concert stages. For many years he has been enchanting audiences as an ambassador for classical music in the 21st century. The New York Times refers to his ‘intensive expressiveness’ and describes him as a ‘fearless player with technique to burn’.

In addition to performances of the great cello concertos, Daniel Müller-Schott has a special interest in discovering unknown works and extending the cello repertoire, including his own transcriptions and through cooperation with contemporary composers. Sir André Previn and Peter Ruzicka have dedicated cello concertos to him, which were premiered under the direction of the composers with the Gewandhausorchester Leipzig and the Kammerphilharmonie Bremen.