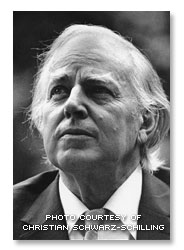 
Born in Hanover on 9 May 1904, the son of manufacturer Carl Schwarz, Reinhard Schwarz-Schilling received piano lessons at an early age from a pupil of Franz Liszt and began to compose at the age of fourteen. After high school he took up the study of music, first in Munich and Florence, then in Cologne, where he studied composition with Walter Braunfels (1882-1954), conducting with Carl Ehrenberg (1878- 1962), and organ. Having reached a certain degree of proficiency, he was then sent by Braunfels in 1927 to Ried near Benediktbeuern in Upper Bavaria to complete his studies with Heinrich Kaminski (1886-1946), the eminent heir to the German contrapuntal legacy of Bach, Beethoven, and Bruckner. It was Kaminski who became the young man’s decisive influence. There he also met the Polish pianist Dusza von Hakrid, whom he married in 1929. In the same year the young couple settled in Innsbruck, where Schwarz-Schilling worked as an organist and choir conductor until 1935. In Innsbruck he composed his first two outstanding works, which were soon given a widespread hearing: the String Quartet in F minor (1932) and the Partita for Orchestra (1934-35). From 1935 to 1938 Schwarz-Schilling was a free-lance composer in Feldafing on Lake Starnberg near Munich. In 1938 he joined the staff of the Berlin Musikhochschule. He lived in Berlin until his death on 9 December 1985.