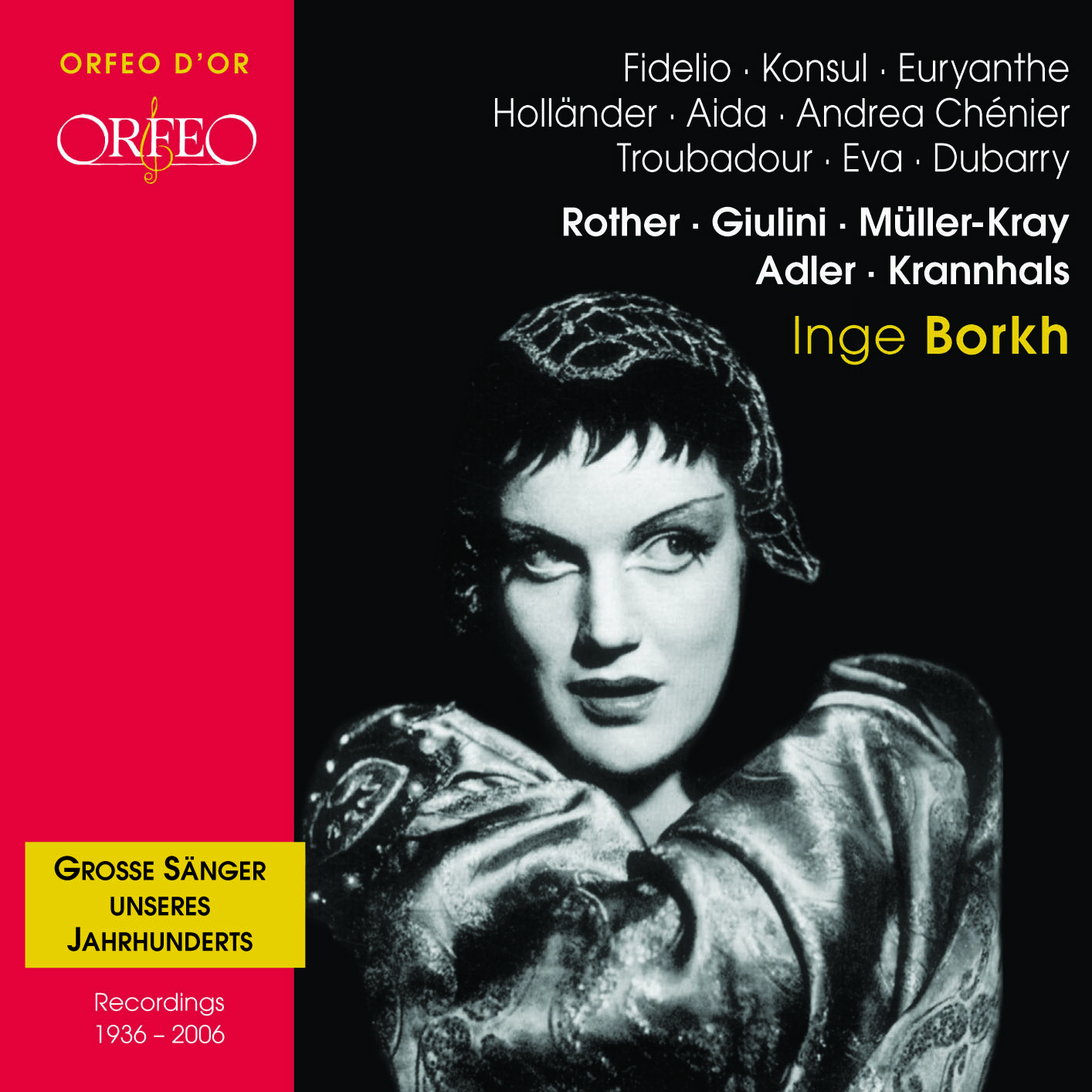 The daughter of a diplomat father, Inge Borkh initially trained as an actress and participated in the Reinhardt seminars at the Burgtheater in Vienna, before becoming professionally active on the stage in Linz, Austria, during 1937 and in Basle, Switzerland, from 1938. She then studied singing with Muratti in Milan and later at the Salzburg Mozarteum, and made her operatic debut in 1940 at Lucerne as Czipra / Der Zigeunerbaron, followed by Agathe / Der Freischütz. During World War II she sang at Basle, Lucerne and Zürich, and made her debut in the title role of Richard Strauss’s Salome as early as 1943, at Berne. This, together with the title role in the same composer’s Elektra, was to become a signature part for her, displaying to the full her considerable skills as an actress as well as a singer.

During 1950 Borkh appeared as a guest in Berlin and Munich, but her big breakthrough came in the following year, when she sang Magda Sorel in the first German-language production of Menotti’s The Consul at Basle to great critical acclaim. In 1952 Borkh became a member of the Deutsche Oper, Berlin and of the Munich State Opera, in the same year also making her Bayreuth Festival debut as Freia / Das Rheingold and Sieglinde / Die Walküre.

She appeared as a guest throughout Europe in Barcelona, Hamburg, Lisbon, Naples, Stuttgart and Vienna, as well as in South America at Rio de Janeiro in 1954. Many important festival appearances also occurred during the mid-1950s, including the Florence Maggio Musicale in 1954 as Eglantine / Euryanthe, with Giulini conducting, and the Salzburg Festival in 1955 as Cathleen in the world premiere of Werner Egk’s Irische Legende. She returned to Salzburg as Elektra in 1957, with Mitropoulos conducting, and in 1962 and 1963 as Klyaemnestra in Gluck’s Iphigenie in Aulis.

Borkh’s debut at La Scala, Milan, was as Silvana in Respighi’s La fiamma in 1955. She returned there in 1964 to take the role of Katerina Ismailova in Shostakovich’s Lady Macbeth of Mtsensk. At Covent Garden she sang Salome in 1959 and the Dyer’s Wife in Strauss’s Die Frau ohne Schatten, with Solti conducting, in 1967. Her American debut occurred at San Francisco in 1953 and three years later Borkh took part in the American premiere of Britten’s Gloriana, at Cincinnati. She made her Metropolitan Opera debut as Salome in 1958, returning there to sing Elektra in 1961, the Dyer’s Wife (this time with Böhm conducting), and Leonore / Fidelio, both during 1971.

Among the first performances in which Borkh took part were Louise Talma’s The Alcestiad at Frankfurt in 1962 and Josef Tal’s Ashmedai at Hamburg in 1971. After a run of performances of Elektra in Italy in 1973 she announced her retirement from opera, but continued to be active as an actress and as a chanteuse in cabaret. In addition to the roles already mentioned she was a notable exponent of the title roles in Orff’s Antigone and Puccini’s Turandot, and as Lady Macbeth in the versions by Ernest Bloch and Verdi.

Borkh possessed a large, warm voice, notably free in the upper register, which when allied to her great ability as an actress and striking stage presence often resulted in performances of complete conviction. While her commercial discography was not large, recordings of live performances effectively supplement it, providing vivid evidence of her strengths as an opera singer of note.