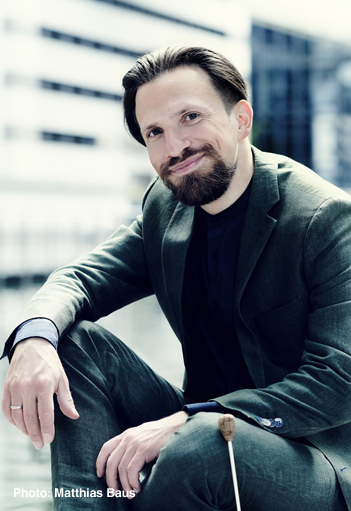 With the RSO Vienna he has held regular concerts in the Vienna Musikverein and the Vienna Konzerthaus. Extensive tours have taken him to Japan and throughout Europe, including to Salzburg Festival. Together with the RSO Vienna, he has been present on European radio, European television, on albums and in the internet.

From 2005 to 2012, Cornelius Meister was general director of music in Heidelberg. During this time he was awarded the ‘Prize for the Best Concert Programme’ by the German Federation of Music Publishers and the ‘Young Ears’ Prize and the Prize of the German Music Council for conveying music to children and adolescents in 2007 and 2010.

At the age of 21, Cornelius Meister held his début at Hamburg State Opera, followed by débuts at the Bavarian State Opera in Munich, the New National Opera Tokyo, the San Francisco Opera, the German Opera in Berlin, the Theater an der Wien, the Latvian National Opera in Riga (Der Ring des Nibelungen), the Royal Opera in Copenhagen, the Semper Opera in Dresden, Zurich Opera and Vienna State Opera.

Cornelius Meister studied piano and conducting with Konrad Meister, Martin Brauss and Eiji Oue in Hanover and with Dennis Russel Davies, Jorge Rotter and Karl Kamper at Salzburg Mozarteum. He also plays the cello and the French horn. As a pianist, he has held concerts in Europe and the USA and is a prizewinner of the German Music Competition and the Schleswig-Holstein Music Festival.