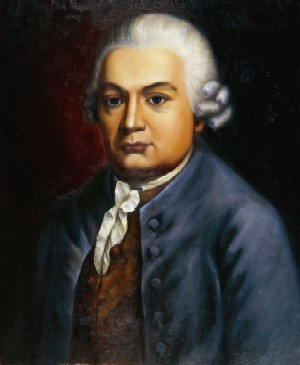 
The second son of the great Johann Sebastian Bach by his first wife, CPE Bach was recognised as one of the greatest harpsichordists of his time. After study at university, a privilege denied his father, he became harpsichordist to the Crown Prince of Prussia, later Frederick the Great, and left his service in 1767 after the death of his godfather Telemann, whom he succeeded as director of music of the five city churches of Hamburg. He was greatly respected both as a composer and as a friend of some of the most distinguished writers and thinkers of his time. In 1755 he published his influential Essay on the True Art of Playing Keyboard Instruments. From his very considerable output, his sonatas for flute and harpsichord remain an attractive part of chamber music repertoire, and his symphonies written for Baron van Swieten, arbiter elegantium in Vienna, a man whose taste was generally trusted in artistic matters, are similarly notable. Music by CPE Bach is often listed with a reference number from the catalogue of his works by Wotquenne (Wq).

CPE Bach wrote a great deal of music for the instruments on which he was acknowledged to be pre-eminent as a performer: the harpsichord and the gentler clavichord. These include six sonatas, Wq. 49, and twelve variations on the best known of contemporary themes for variations, La Folie d’Espagne, Wq. 118.9.