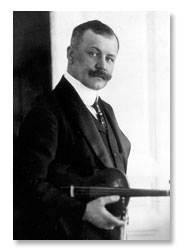 
The reputation of Franz Lehár as a composer of operetta is assured. The son of a bandmaster serving principally in Hungary, he followed his father’s profession before winning, in 1902, success in the theatre in Vienna. He succeeded in reviving the operetta, providing music of greater distinction, and tenor arias written specifically for Richard Tauber.

Operettas
Lehár wrote nearly 40 operettas. Of these by the far the best known is Die lustige Witwe (‘The Merry Widow’), first staged in Vienna in 1905 – the favourite operetta of Adolf Hitler.

Orchestral Music
Lehár also made a significant contribution to Viennese light music with some 65 waltzes and 50 or more marches.