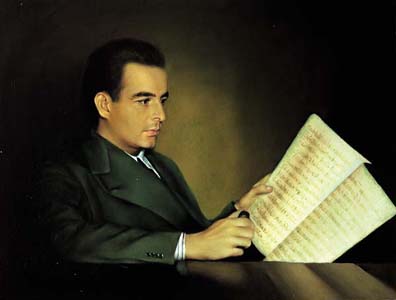 
Samuel Barber is widely known for his famous Adagio for Strings, the slow movement of a string quartet he wrote in 1936. Born in West Chester, Pennsylvania in 1910, he was one of the first students at the Curtis Institute in Philadelphia, where he studied piano, conducting, singing and composition. Awards allowed subsequent study in Rome. He taught briefly at the Curtis Institute but soon withdrew, sharing a house with his former fellow-student Menotti. His music remained neo-Romantic in idiom, although not without contemporary influences.

Barber wrote three operas: Vanessa, with a libretto by Menotti, A Hand of Bridge, for four singers and chamber orchestra, and Antony and Cleopatra, with a libretto by Zeffirelli, the last a relatively unsuccessful commission from the Metropolitan Opera in New York. His two ballet scores are Medea and Souvenirs, from which orchestral movements are derived.

The Adagio for Strings was arranged for string orchestra from the slow movement of Barber’s String Quartet of 1936 and played in this form by the NBC Symphony Orchestra under Toscanini in New York two years later, in a programme that included his first Essay. Other orchestral compositions include his overture The School for Scandal, which had won him an award in 1933, concertos for violin, for cello and for piano, a Capricorn Concerto for solo wind instruments, and two symphonies.

In addition to his String Quartet, Barber wrote sonatas for violin and for cello, and a wind quintet called Summer Music.

Barber’s Piano Sonata touches in passing on 12-note technique although it is generally tonal in conception. Other compositions for piano are Excursions (a substantial four-movement work) and Nocturne (in homage to the originator of the form, John Field). His Souvenirs, originally for four hands and then for solo piano, was scored for the ballet.

Barber’s songs include a setting of Matthew Arnold’s Dover Beach, Knoxville: Summer of 1915 and Hermit Songs, settings of Irish texts from the 13th to 18th centuries. Choral works include an arrangement of the Adagio as an Agnus Dei, Prayers of Kierkegaard, and the 1971 Neruda setting The Lovers, for baritone, chorus and orchestra.