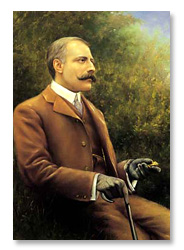 
Edward Elgar was arguably the leading English composer of his generation and a significant figure among late-Romantic European musicians. Born in the west of England in 1857, the son of a piano-tuner and owner of a music shop, he earned his earlier living as an organist, violinist and teacher in his own part of the country. After his marriage in 1889 he found himself able to move to London as a composer, but success only came later, after his return to the West Country, confirmed by the ‘Enigma’ Variations, first performed in London in 1899. Knighted in 1904, he wrote relatively little after the death of his wife in 1920.

Choral Music
Elgar wrote a number of oratorios and works for chorus and orchestra. These include The Apostles and The Kingdom, and the cantata Caractacus. The most significant of all is The Dream of Gerontius, with words by Cardinal Newman, a remarkable study of a man on his deathbed. Sea Pictures, an anthology of songs for contralto and orchestra with texts related to the sea, was written in 1899 and won contemporary success. His earlier compositions include music for the Catholic church in Worcester, where he followed his father as organist.

Orchestral Music
The ‘Enigma’ Variations, with its portraits in each variation of one of the composer’s friends and its unsolved musical puzzle in the ‘hidden’ theme which apparently spans the whole set, is one of the best-known of his works. Still more familiar, if less substantial, must be the ‘Pomp and Circumstance’ Marches. His concert overture Cockaigne is an evocation of London, while the Elegy, the Introduction and Allegro and the Serenade, all for string orchestra, offer music of the highest quality. Elgar’s Cello Concerto, written in 1919, enjoys great popularity, not yet matched by that of the earlier Violin Concerto, composed before the war. Elgar’s two completed symphonies are comparable, at least, to the work of other great symphonists of the period. He left sketches for a third, now conjecturally reconstructed.

Chamber Music
Elgar wrote a number of pieces for violin and piano during the earlier part of his life. Of the smaller pieces that survive, Chanson de nuit and Chanson de matin have considerable charm. Of much greater weight are the three chamber works of 1918, the Violin Sonata in E minor, String Quartet in the same key, and Piano Quintet in A minor.

Keyboard Music
Elgar wrote relatively little for the piano, but his Salut d’amour (‘Love’s Greeting’), originally written for his wife and bearing a German title, has proved popular both in its original form and in a multitude of arrangements. As an organist himself, he wrote a few works for the instrument, including a Sonata and some voluntaries. A second organ sonata was arranged, under his supervision, from his Severn Suite. His piano music includes a number of short pieces, as well as a keyboard version of his ‘Enigma’ Variations.