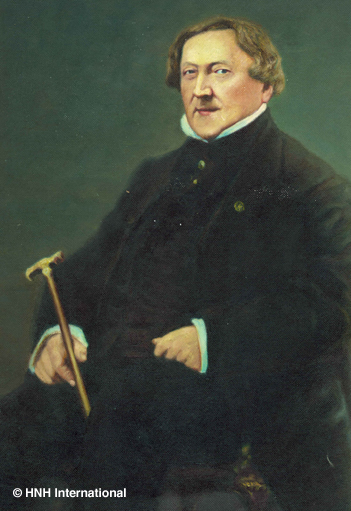 
Rossini occupied an unrivalled position in the Italian musical world of his time, winning considerable success relatively early in his career. The son of a horn player and a mother who made a career for herself in opera, as a boy he had direct experience with operatic performance, both in the orchestra pit and on stage. His operas from his first relative success in 1810 until 1823 were first performed in Italy. There followed a period of success in Paris, leading to his final opera, Guillaume Tell (‘William Tell’), staged in Paris in 1829. The revolution of 1830 prevented the fulfillment of French royal commissions for the theatre, but in his later life he continued to enjoy considerable esteem—both in Paris, where he spent much of his last years, and in his native Italy. There he spent the years from 1837 to 1855, before returning finally to France, where he died in 1868. The last 40 years of his life were creatively silent: no more operas issued from his pen.

Of Rossini’s three dozen or so operas, Il barbiere di Siviglia (‘The Barber of Seville’) is probably the best known, a treatment of the first play of the Figaro trilogy by Beaumarchais on which Mozart had drawn 30 years earlier in Vienna. Other well-known comic operas by Rossini include La scala di seta (‘The Silken Ladder’), Il Signor Bruschino, L’italiana in Algeri (‘The Italian Girl in Algiers’), Il Turco in Italia (‘The Turk in Italy’), La Cenerentola (‘Cinderella’) and La gazza ladra (‘The Thieving Magpie’). More serious subjects were tackled in Otello, Semiramide, Mosè in Egitto (‘Moses in Egypt’) and the French Guillaume Tell (based on the play by Schiller). The overtures to many of these operas are a recurrent element in the repertoire of the concert hall.

Church music by Rossini includes the Petite Messe solennelle, originally for 12 solo voices, two pianos and harmonium but rescored four years later, in 1867, with orchestral accompaniment. Rossini’s Stabat mater was written in 1841 in its final version.

Instrumental compositions by Rossini include his early string sonatas, designed for two violins, cello and double bass and thought to have been written when the composer was 12. The string sonatas show a precocious command of Italian operatic style, here translated into instrumental terms. The so-called Péchés de vieillesse (‘Sins of Old Age’) consist of 13 volumes of varied music, some vocal, some instrumental (five designed for the piano). They consist of pieces that demonstrate both the well-known wit of the composer as well as his continuing technical command of musical resources.