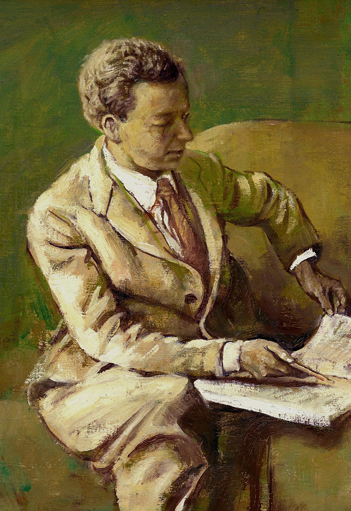 
Benjamin Britten must be accepted as the most outstanding English composer working in the mid-20th century. He won a significant international reputation while remaining thoroughly English in inspiration, a feat that his immediate predecessors had been unable fully to achieve.

Britten won a triumph in 1945 with his opera Peter Grimes, first staged when Sadler’s Wells Theatre in London reopened after the Second World War. The aspirations of the central character, the fisherman Peter Grimes, a man at odds with the community in which he lives, are frustrated by a combination of social pressure and sheer chance, leading to his suicide. The drama is set against the background of the sea, in various moods, summarised in Four Sea Interludes, whichforms an evocative piece of concert repertoire. Britten’s subsequent operas include works on a smaller scale for his English Opera Group: The Rape of Lucretia, Albert Herring and The Turn of the Screw. Billy Budd and the coronation opera Gloriana were followed by A Midsummer Night’s Dream, the television opera Owen Wingrave, and the remarkable operatic version of Thomas Mann’s Death in Venice. His three church parables draw inspiration from Japan and from their medieval setting. All these works constitute a very significant element in international dramatic and operatic repertoire. An early collaboration with the poet WH Auden, Paul Bunyan, was staged in New York in 1941, to be revised in 1974 for publication.

The best known of all Britten’s orchestral music must be Variations and Fugue on a Theme of Purcell (more generally known under its popular title The Young Person’s Guide to the Orchestra), a work that is both a tribute to the great 17th-century English composer Henry Purcell and a useful teaching piece. Lachrymae, subtitled ‘Reflections on a Theme of Dowland’, is a tribute to a still earlier predecessor, the lutenist John Dowland; arranged by the composer shortly before his death from its original viola and piano version, it is immensely moving. The early Matinées Musicales, based on the music of Rossini, is an attractive piece, and the Simple Symphony for string orchestra, based on tunes written by the composer in childhood, is a useful element in string orchestra repertoire. Britten’s Variations on a Theme of Frank Bridge, written in 1937, serves as a brilliant tribute to his teacher, and his Piano Concerto and Violin Concerto come from the same period. His Cello Symphony was written in 1963 for his friend, the Russian cellist Mstislav Rostropovich.

Britten was strongly influenced in his music and in his life by the tenor Peter Pears. For him he wrote a quantity of songs, including the splendid Serenade for tenor, horn and strings and the evocative Nocturne (both incomparable settings of the words of various English poets), as well as several other settings of poets (from Michelangelo to Thomas Hardy) for tenor and piano. His folksong arrangements have pleased a wide audience. Major choral works include the War Requiem, which combines the text of the Latin Requiem with the war poems of Wilfred Owen and forms an expression of Britten’s own pacifism. His Ceremony of Carols, settings accompanied by solo harp and designed, as were some other works, for boys’ voices, marked his return from America to wartime England in 1942.

Britten’s chamber music includes a cello sonata and three cello suites for his friend Rostropovich, a fine suite for the Welsh harpist Osian Ellis, and Nocturnal after John Dowland for the guitarist Julian Bream. Of his three numbered string quartets, Quartet No 2 was written to mark the 250th anniversary of the death of Purcell, who provides the quartet’s inspiration.