In 1972, the then 35 year old soprano with the so unmistakably silvery timbre and rapid vibrato that always sounded chaste (together with a slight, charming lisp) gave a Lieder recital at the Salzburg Festival. The programme consisted of virtually unknown Schubert as well as original and high-quality settings by Schubert's close friend Anselm Hüttenbrenner; the wonderful Irwin Gage accompanied her.
Orfeo has documented this recital along with many of her 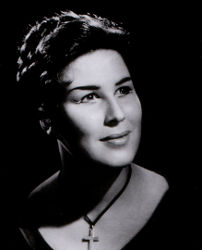 Gundula Janowitzmajor roles at the Vienna State Opera, often in live recordings of complete operas, but also in excerpted form on a portrait album. The latter includes Donna Anna in Don Giovanni under Karajan (1970), Agathe in Der Freischütz (1972) and Ariadne (1976) under Böhm as well as Don Carlo under Horst Stein (1970) – all operas available complete in the Orfeo catalogue – Monteverdi's Poppea (1963), Marzelline and Leonore (Fidelio 1962 and 1978) plus an exquisite excerpt from Meistersinger from 21 October 1975 with Janowitz as Eva and a jovially mischievous Karl Ridderbusch as Sachs. There is also the small jewel of her Fiordiligi at the side of Christa Ludwig as Dorabella in a live recording of Così fan tutte under Josef Krips from the Vienna State Opera (1968).
Gundula Janowitz, who was born on 2 August 1937 in Berlin but was of Hungarian-Austrian extraction, and grew up and was trained in Graz, sang Wagner at Bayreuth as early as 1960: albeit "only" as a Flowermaiden in Parsifal – captured and easily identifiable on CD! This was followed in 1963 by Beethoven's Ninth Symphony with Grace Bumbry, Jess Thomas, George London and the Bayreuth Festival chorus and orchestra under Karl Böhm. Then everything went quite quickly. Thanks to Herbert von Karajan there followed an engagement at the Vienna State Opera, Pamina in Aix-en-Provence in 1963, Ilia (Idomeneo) the following year at Glyndebourne, a string of recordings, Strauss and Wagner in Salzburg (Sieglinde at the first Easter Festival in 1967). Jens Malte Fischer, in his 1995 book Große Stimmen, rightly praised the "marmoreal beauty" of her singing, "as cool as it is classically rigorous".
The great years in Gundula Janowitz's career were the 1970s and 1980s. And yet the Vienna live recording of the "Dove sono" of her Countess in Figaro from 7 February 1990 on the portrait album demonstrates that, shortly before she retired from the stage – she would later still give recitals – her voice had lost none of its character, even though in terms of substance it had been somewhat compromised by singing the great Verdi and Wagner roles like Sieglinde, Elsa and Elisabeth (Tannhäuser). The downside of her exceptionally slender bright voice, rich in harmonics, was that there was always the danger of a certain metallic shrillness.