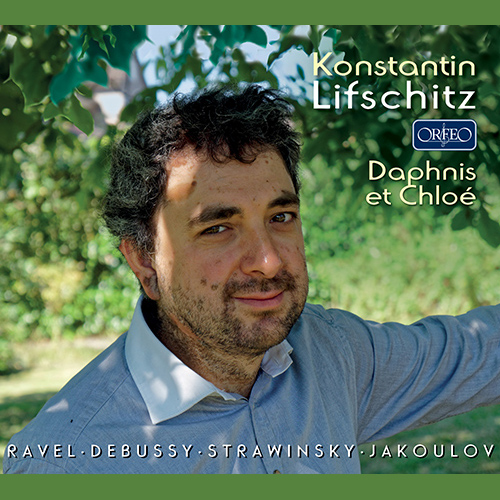 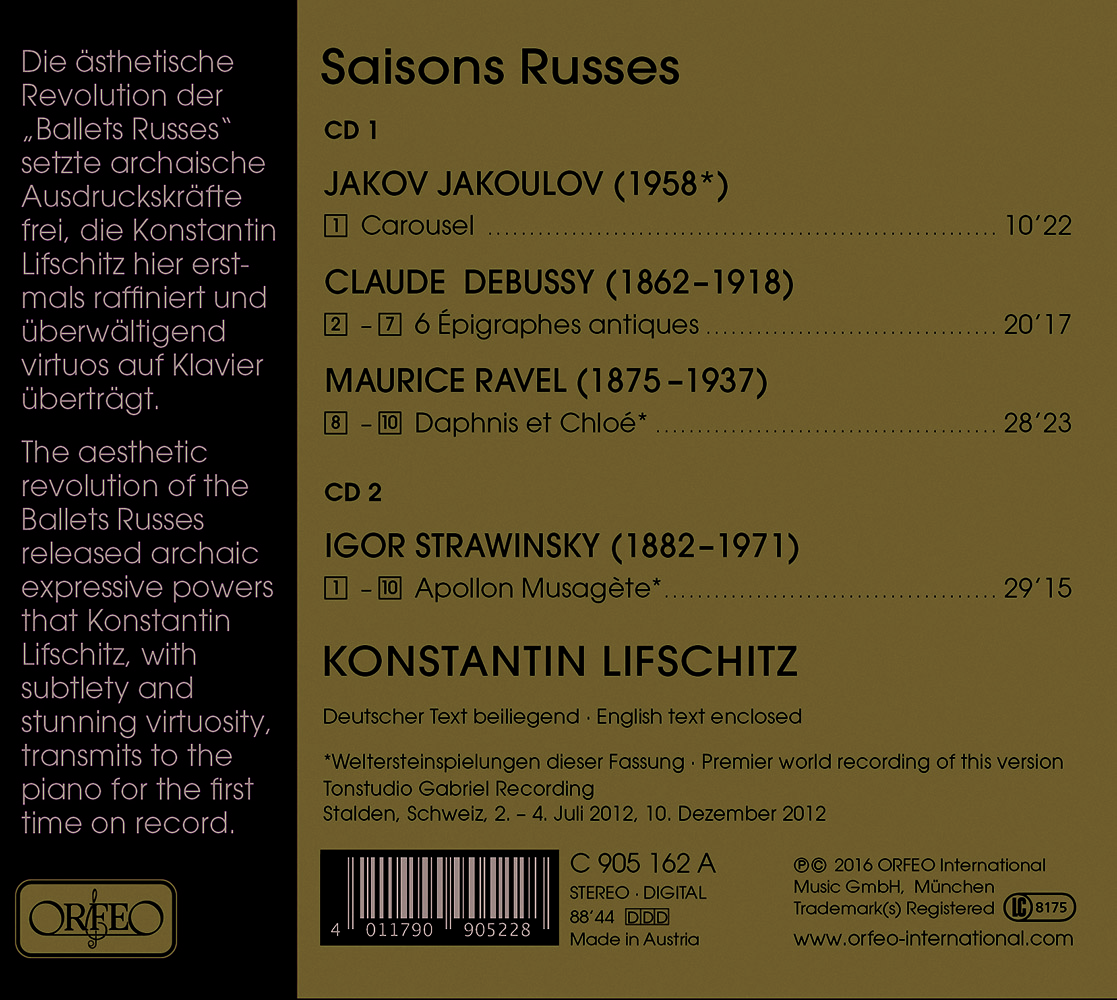 As with his previous CD releases, in choosing his programme Konstantin Lifschitz is concerned not just to find an interesting idea linking the works, but also to bring out the impact of new aural versions. The title “Saisons russes” refers to the pioneering aesthetic and musical developments initiated by the famous impresario Sergei Diaghilev and the legendary performances given by his Ballets Russes company in Paris from 1910 onwards. Many other contemporary composers were also involved in this development, foremost among them Claude Debussy, Maurice Ravel and Igor Stravinsky. The works by these three composers, presented together on this CD, are linked by their treatment of material based on myth and legend, and their use of new musical techniques.

Debussy’s Six Epigraphes antiques are taken from twelve short pieces composed around 1900 as incidental music for 2 flutes, 2 harps and celesta for the “Chansons de Bilitis”, songs inspired by ancient Greek poems. In 1914 Debussy arranged six of them for the eminently suitable piano duet formation. Then in 1915 he re-arranged that version, without changing the essence, but adding refinements to make it more of a virtuoso work for piano solo. This set joins Debussy’s two books of six études each, completed that same year, as the composer’s very last works for piano. Maurice Ravel, who can be viewed as a disciple of Debussy and at the same time was an inspiration to the older composer, produced his longest and most complex orchestral work for the “Saisons russes” in 1912: some 60 minutes long, this “choreographic symphony” entitled Daphnis et Chloé was based on an erotic pastoral novel written by the Greek poet Longus in the third century AD. Igor Stravinsky praised the work as “one of the most beautiful products in the entire history of French music.”

On this CD, Konstantin Lifschitz here plays his own highly ambitious solo piano version of several pieces from Ravel’s work. The cascading notes, orgiastically enhanced dances and intoxicating tone paintings (especially one of a sunrise) require the unleashing of a high degree of virtuosity from the performer, such as Ravel had done in his Gaspard de la Nuit. Even taken to such extremes, it remains astounding how accomplished these piano versions sound, considering that the composer’s Impressionist style was famous for its specific art of orchestration.

After the resounding success of his ballets Petrushka (1910) and The Firebird (1911), Igor Stravinsky shot to the pinnacle of notoriety in 1913 with the Ballets Russes, when his scandalous Rite of Spring was premiered in 1913. On this CD, he is introduced via another, stylistically very different work, composed in 1928, though it does indeed have a link to Diaghilev. Yet again we encounter a character from the world of antiquity, as the god Apollo instructs three muses in their roles and takes them to Mount Parnassus. This ballet music is unusual, as it was written purely for string orchestra. The composer was especially keen to revive the concept of bringing out the melody, something he felt had been neglected over the course of the nineteenth century, leading to a loss of clear melodic lines. Stravinsky believed that melody was definitely compatible with many-voiced, polyphonic composition. This is vividly reflected in this premiere recording of his own piano transcription (unlike Artur Rubinstein’s notorious reworking of the Petrushka Suite). At the work’s premiere in Washington a year before his death, Diaghilev expressed his entire satisfaction with it.

Jakov Jakoulov’s work Carousel, written specially for Konstantin Lifschitz, provides a further link to the “typical” beginnings of the Ballets Russes with Petrushka. Born in Moscow, Jakoulov emigrated via Munich to Boston. Carousel combines virtuoso aplomb and instinctive playing with abrupt mood changes and immersion in diverse worlds of expression. The merry-go-round is used to portray human life: a somewhat banal analogy, one might think, but one which – the composer believes – reveals a inherent truth. We all revolve around the axis of our own fate until the spring snaps, bringing the carousel to a halt. “Well, after all, we’re Russians, aren’t we?”