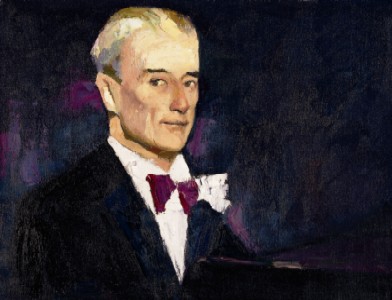 
French, of paternal Swiss and maternal Basque descent, Ravel combined skill in orchestration with meticulous technical command of harmonic resources, writing in an attractive musical idiom that was entirely his own in spite of contemporary comparisons with Debussy, a composer his senior by some 20 years.

Ravel wrote two operas. The first, L’heure espagnole (‘The Spanish Clock’), is described as a comédie musicale; the second, with a libretto by Colette, is the imaginative L’Enfant et les sortilèges (‘The Child and the Enchantments’), in which the naughty child is punished when furniture and animals assume personalities of their own.

Ravel wrote his ballet Daphnis et Chloé in response to a commission from the Russian impresario Diaghilev. The work, described as a symphonie choréographique, is based on the Hellenistic pastoral novel of Longus. Ma Mère l’oye (‘Mother Goose’), originally for piano duet, was orchestrated and used for a ballet, as were the Valses nobles et sentimentales and the choreographic poem La Valse. Ravel’s last ballet score was the famous Boléro, a work he himself described as an orchestrated crescendo.

In addition to the scores for ballet and arrangements of piano works for the same purpose, Ravel wrote an evocative Rapsodie espagnole (‘Spanish Rhapsody’). Other orchestrations of original piano compositions include a version of the very well-known Pavane pour une infante défunte (‘Pavane for a Dead Infanta’), the Menuet antique, Alborada del gracioso from Miroirs, and pieces from Le Tombeau de Couperin. Ravel wrote two piano concertos: the first, completed in 1930, was for the left hand only, commissioned by the pianist Paul Wittgenstein who had lost his right arm in the war; the second, for two hands, was completed in 1931.

Songs by Ravel include the remarkable Shéhérazade (settings of a text by Tristan Klingsor for mezzo-soprano and orchestra) and the Don Quichotte à Dulcinée (‘Don Quixote to Dulcinea’) songs, originally written for a film about Don Quixote in which the famous Russian bass Chaliapin was to star. Songs with piano include settings of Jules Renard’s Histoires naturelles, portraying its instinctive sympathy with the birds and the cricket. Ravel’s five unsuccessful attempts to win the Prix de Rome are represented by five cantatas, submitted according to the rules of the competition as he chose to interpret them.

Ravel’s chamber music includes the evocative nostalgia of Introduction and Allegro for harp, flute, clarinet and string quartet, a violin sonata with a jazz-style blues movement, a piano trio, and a string quartet. Tzigane, written for the Hungarian violinist Jelly d’Arányi, is a remarkable excursion into extravagant gypsy style.

Ravel himself was a good pianist. His music for the piano includes compositions in his own nostalgic archaic style, such as the Pavane and the Menuet antique, as well as the more complex textures of pieces such as Jeux d’eau (‘Fountains’), Miroirs and Gaspard de la nuit, with its sinister connotations. The Sonatina is in Ravel’s neoclassical style and Le Tombeau de Couperin is in the form of a Baroque dance suite.