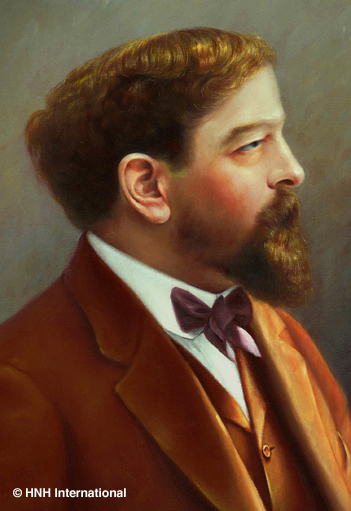 
Claude Debussy has exercised widespread influence over later generations of composers, both in his native France and elsewhere. He was trained at the Paris Conservatoire, and decided there on a career as a composer rather than as a pianist (his original intention). His highly characteristic musical language, thoroughly French in inspiration, extended the contemporary limits of harmony and form, and he had a remarkably delicate command of nuance, whether in piano writing or in the handling of a relatively large orchestra.

Debussy attempted many operas, two based on stories by Edgar Allan Poe, but he completed only one: Pelléas et Mélisande, a version of the medieval play by Maurice Maeterlinck, with its story of idealised love perfectly matched by the composer’s musical idiom.

The most influential piece of orchestral music by Debussy is the Prélude à l’après-midi d’un faune (‘Prelude to the Afternoon of a Faun’), based on a poem by Mallarmé. This was later used for a ballet, with choreography by Nijinsky, who created a considerable scandal at the first performance. The music evokes a pagan world, as the satyr of the title takes his ease in the afternoon shade on a summer day.

The three symphonic sketches that constitute La Mer (‘The Sea’), published with a famous woodcut known as The Wave (from the Japanese artist Hokusai’s views of Mount Fuji—an indication of oriental influence on Debussy), offer evocations of the sea from dawn to midday, of the waves, and of the dialogue of wind and sea. Other orchestral works by Debussy include Nocturnes, made up of three sections: Nuages (‘Clouds’), Fêtes (‘Festivals’) and Sirènes. Images, a work in three movements completed in 1912, includes Gigues, Ibéria and Ronde de printemps, the last a celebration of spring. His Le Martyre de Saint Sébastien, finally scored by André Caplet, was in origin a theatrical and choreographic collaboration with Gabriele d’Annunzio.

Debussy sketched out orchestration for his Rapsodie for saxophone and piano, completed after his death by Roger-Ducasse, an interesting addition to the repertoire of an instrument often neglected by classical composers.

Debussy’s chamber music includes a fine string quartet, known as the first, although the second, like so much of the composer’s work, existed only as a future project. He wrote his Rapsodie for saxophone (later orchestrated) somewhat reluctantly, while Syrinx, for unaccompanied flute, in which the pagan god Pan plays his flute, was originally written as incidental music for the theatre. Towards the end of his life Debussy planned a series of six chamber works, patriotically announced as by “Claude Debussy, musicien français”. He completed three of these projected works: a violin sonata, a cello sonata and a sonata for flute, viola and harp.

Debussy made a significant addition to the French song repertoire, capturing the spirit, in particular, of the work of poets like Verlaine and Mallarmé, but also turning to earlier poets, including Villon and Charles d’Orléans. His Chansons de Bilitis, settings of verses by Pierre Louÿs, turn again to the pagan world, while the settings of the Verlaine Fêtes galantes, including Clair de lune, capture the nostalgia of the poems, their yearning for an unattainable past. His cantata Le Printemps was his submission for the Prix de Rome.

In his writing for the piano Debussy proved himself a successor to Chopin, who had died in Paris 13 years before Debussy’s birth. His own debt to Chopin was overtly expressed in his two books of Études (‘Studies’), completed in 1915. The Deux Arabesques, early works, enjoy continued popularity, as does the Suite bergamasque, with its all too popular ‘Clair de lune’. Estampes (‘Prints’) evokes the Far East in ‘Pagodes’, Spain in ‘La Soirée dans Grenade’ (‘Evening in Granada’), and autumnal sadness in ‘Jardins sous la pluie’ (‘Gardens in the Rain’), while L’Isle joyeuse turns to Watteau for inspiration. Two sets of Images offer further delicate pictures, while the two books of Préludes offer still more varied images, from La Fille aux cheveux de lin (‘The Girl with Flaxen Hair’) and La Cathédrale engloutie (‘The Submerged Cathedral’) to the final Feux d’artifice (‘Fireworks’). The single La Plus que lente (‘More than Slow’) of 1910 and the light-hearted Children’s Corner Suite form a further part of a larger series of works.