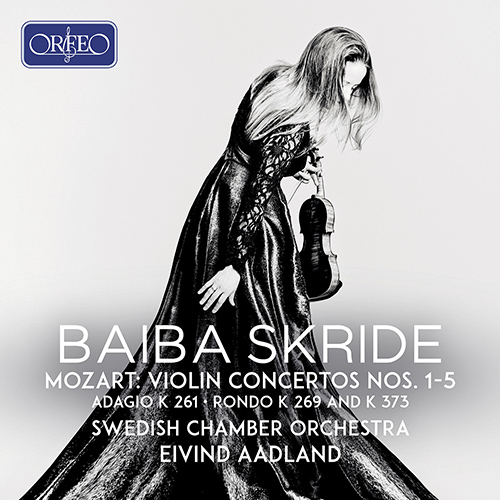 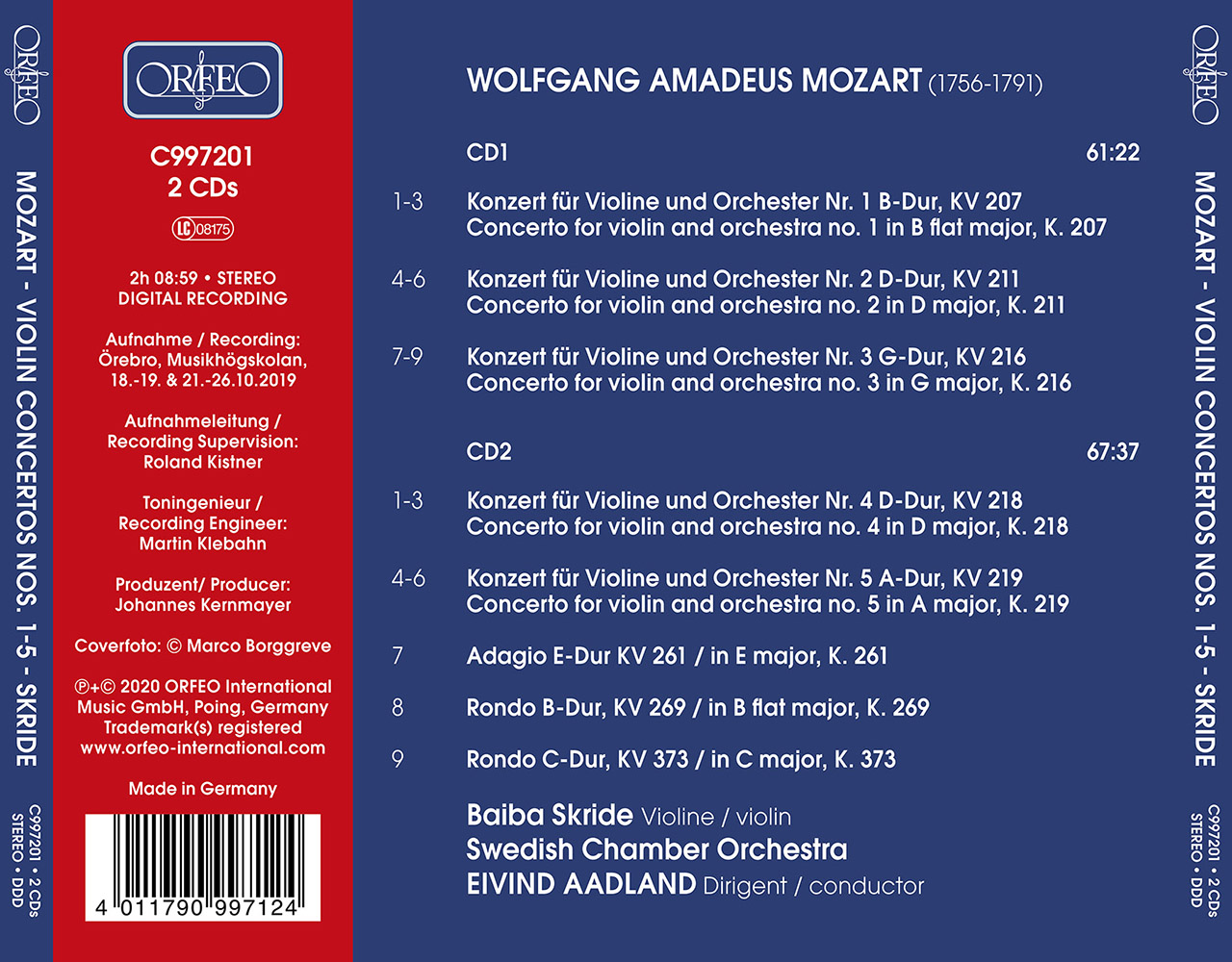 Mozart composed his violin concertos in 1773 (K 207) and 1775 (K 211, 216, 218 and 219). These five works and the three single movements recorded here have been passed down complete and verified as authentic. The genesis of these works is closely linked to Mozart’s work as Kapellmeister at the Salzburg court, ending with the probably most important kick-out in music history.

Mozart scored no solo cadenzas for his violin concertos; in the practice of the time, they were improvised. All the cadenzas on these recordings derive from Baiba Skride.

„Baiba is such an intuitive player. She has this rare quality of discovering the music as we play. So she never plays exactly the same. There is a wonderful sense of creating, discovering, of going finding new ways.“

Baiba Skride about her new album:

“I know that there are so many different and super recordings of Mozart, but I think it is important to enjoy the music you have heard a thousand times and will hear a thousand times more with new eyes and simply allow the music to play.”

Summer 2019 sees Baiba Skride’s appearance at Orchestre Symphonique de Montréal’s Classical Spree festival in multiple concerts, followed by her return to the Grafenegg Festival with the Tonkünstler-Orchester as well as chamber music performances at the Schubertiade Schwarzenberg, Festspiele Mecklenburg-Vorpommern and Gewandhaus Leipzig. Her 19/20 season begins with a season opening concert with the Residentie Orkest as part of her residency, which sees her return to the orchestra with three different concertos throughout the season. She also looks forward to the world premiere of the Victoria Borisova-Ollas violin concerto with the Royal Stockholm Philharmonic followed by premieres with the Lahti Symphony Orchestra and the BBC Symphony Orchestra at the Barbican. Further highlights include the Dutch premiere of Sebastian Currier’s violin concerto at the Concertgebouw Amsterdam with the Netherlands Radio Philharmonic, concerts with the hr-Sinfonieorchester Frankfurt, at the Philharmonie Cologne and Philharmonie Berlin on tour with the Orchestre National du Capitole de Toulouse, Staatskapelle Weimar, Rotterdam Philharmonic, Orchestre Philharmonique du Luxembourg, Danish National Symphony Orchestra, Swedish Chamber Orchestra and Iceland Symphony Orchestra.  In the US she gives her debut with Pittsburgh Philharmonic and returns to St. Louis and Oregon Symphony Orchestras.

Baiba Skride is a sought-after chamber musician internationally and commits to the long established duo with her sister Lauma. As one of the founding members of the Skride Quartet, she embarks on the quartet’s first Australian tour in November 2019. In 2020, invitations continue to take the Skride Quartet to the Concertgebouw Amsterdam, Sociedad Filarmónica de Bilbao, Harvard Musical Association Boston and Schubert Club St. Paul. In 19/20, Baiba Skride also performs in duo with Martin Stadtfeld, in trio with Daniel Müller-Schott and Xaiver de Maistre and in quintet with Alban Gerhardt, Brett Dean, Gergana Gergova and Amihai Grosz.

Baiba Skride is anticipating the release of her Bartok recording with the WDR Sinfonieorchester and Eivind Aadland, adding to her prolific discography including her recently released American disc featuring Bernstein, Korngold and Rózsa with the Gothenburg Symphony and Tampere Philharmonic Orchestras under the baton of Santtu-Matias Rouvali and the debut recording of the Skride Quartet, all under the Orfeo label.

Skride was born into a musical Latvian family in Riga where she began her studies, transferring in 1995 to the Conservatory of Music and Theatre in Rostock. In 2001 she won the 1st prize of the Queen Elisabeth Competition. Baiba Skride plays the Yfrah Neaman Stradivarius kindly loaned to her by the Neaman family through the Beare’s International Violin Society.