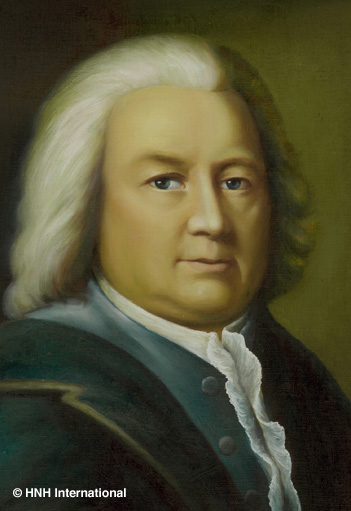 
Johann Sebastian Bach belonged to a dynasty of musicians. In following inevitable family tradition, he excelled his forebears and contemporaries, although he did not always receive in his own lifetime the respect he deserved. He spent his earlier career principally as an organist, latterly at the court of one of the two ruling Grand Dukes of Weimar. In 1717 he moved to Cöthen as Court Kapellmeister to the young Prince Leopold and in 1723 made his final move to Leipzig, where he was employed as Cantor at the Choir School of St Thomas, with responsibility for music in the five principal city churches. In Leipzig he also eventually took charge of the University Collegium musicum and occupied himself with the collection and publication of many of his earlier compositions. Despite widespread neglect for almost a century after his death, Bach is now regarded as one of the greatest of all composers. Bach-Werke-Verzeichnis numbers, abbreviated to BWV, are generally accepted for convenience of reference.

Bach wrote a very large amount of choral music, particularly in connection with his employment at Leipzig. Here, he prepared complete cycles of cantatas for use throughout the church year, in addition to the larger-scale settings of the Latin Mass and the accounts of the Passion from the gospels of St Matthew and of St John. These works include the Mass in B minor, BWV 232, St Matthew Passion, BWV 244, St John Passion, BWV 245, Christmas Oratorio, BWV 248, Easter Oratorio, BWV 249, and the revised setting of the Magnificat, BWV 243. Cantatas include, out of over 200 that survive, Herz und Mund und Tat und Leben, BWV 147 (from which the pianist Dame Myra Hess took her piano arrangement under the title Jesu, Joy of Man’s Desiring, making this the most popular of all), Ein feste Burg ist unser Gott, BWV 80, Ich habe genug, BWV 82, Jesu, meine Freude, BWV 358, Mein Herze schwimmt im Blut, BWV 199, Wachet auf, BWV 140, and Jauchzet Gott in allen Landen, BWV 51, for soprano, trumpet, strings and basso continuo. The rather more formal half dozen or so motets include a memorable version of Psalm CXVII, Lobet den Herrn, alle Heiden, BWV 230.

Secular cantatas include the light-hearted Coffee Cantata, BWV 211 (a father’s attempt to stem his daughter’s addiction to the fashionable drink), the Peasant Cantata, BWV 212 (in honour of a newly appointed official), and two wedding cantatas, Weichet nur, BWV 202, and O holder Tag, BWV 210. Was mir behagt, ist nur die muntre Jagd, BWV 208, was written in 1713 to celebrate the birthday of the hunting Duke Christian of Saxe-Weissenfels and later reworked for the name day of August III, King of Saxony, in the 1740s. The Italian Non sa che sia dolore, BWV 209, apparently marked the departure of a scholar or friend from Leipzig.

During the period Bach spent at Cöthen he was able to devote his attention more particularly to instrumental composition for solo instruments, for smaller groups or for the small court orchestra.

Particularly important are the three sonatas and three partitas for unaccompanied violin, BWV 1001–6, works that make great technical demands on a player, and the six suites for unaccompanied cello, BWV 1007–12. There are six sonatas for violin and harpsichord, BWV 1014–19, and an interesting group of three sonatas for viola da gamba and harpsichord, sometimes appropriated today by viola players or cellists, BWV 1027–9. The Musical Offering resulted from Bach’s visit in 1747 to the court of Frederick the Great, where his son Carl Philipp Emanuel was employed. From a theme provided by the flautist king he wrote a work that demonstrates his own contrapuntal mastery and includes a trio sonata for flute, violin and continuo. Bach had earlier in his career written a series of flute sonatas, as well as a partita for unaccompanied flute.

The six ‘Brandenburg’ Concertos, BWV 1046–51, dedicated to the Margrave of Brandenburg in 1721, feature a variety of forms and groups of instruments, while the four orchestral suites or overtures, BWV 1066–1069, include the famous ‘Air on the G String’, a late-19th-century transcription of the Air from the Suite in D major, BWV 1068.

Three of Bach’s violin concertos, written at Cöthen between 1717 and 1723, survive in their original form, with others existing now only in later harpsichord transcriptions. The works in original form are the Concertos in A minor and in E major, BWV 1041 and 1042, and the Double Concerto in D minor for two violins, BWV 1043.

Bach wrote or arranged his harpsichord concertos principally for the use of himself and his sons with the Leipzig University Collegium musicum between 1735 and 1740. These works include eight for a single solo harpsichord and strings, BWV 1052–9, and others for two, three and four harpsichords and strings. It has been possible to provide conjectural reconstructions of lost instrumental concertos from these harpsichord concertos, including a group originally for oboe and the oboe d’amore and one for violin and oboe.