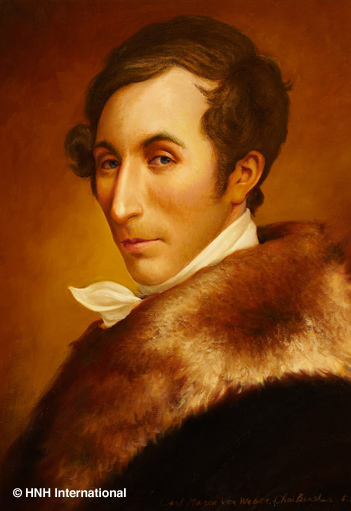 
Carl Maria von Weber, a cousin of Mozart’s wife Constanze, was trained as a musician from childhood; he was the son of a versatile musician who had founded his own travelling theatre company. He made a favourable impression as a pianist and then as a music director, notably in the opera houses of Prague and Dresden. Here he introduced various reforms and was a pioneer of the craft of conducting without the use of violin or keyboard instrument. As a composer he won a lasting reputation with the first important Romantic German opera, Der Freischütz.

Operas
Weber’s early experience of the theatre brought precocious attempts at opera, his first such work performed in Freiburg in 1800, when he was 14. Peter Schmoll was staged in Augsburg in 1803 and Silvana, with its German forest setting, in Frankfurt in 1810. The opera Der Freischütz (‘The Marksman’), first staged in Berlin in 1821, blends many of the ingredients typical of German Romanticism, simple peasant virtues mingling with the magic and latent evil of the forest, where the hero’s magic bullets are forged at midnight. The grand heroic-Romantic opera Euryanthe is better known for its overture as is the opera Oberon, written for London in 1826. Die drei Pintos (‘The Three Pintos’) was left unfinished, to be completed subsequently by Mahler.

Orchestral Music
Weber’s two concertos and the Concertino for clarinet were written for the clarinettist Heinrich Baermann. Weber also wrote two piano concertos and a Konzertstück for piano and orchestra for his own use, as well as a useful Horn Concertino and Bassoon Concerto. His Aufforderung zum Tanze (‘Invitation to the Dance’) is well known in an orchestral version, the work originally written for piano.

Chamber Music
Weber’s chamber music includes a Clarinet Quintet and a Grand Duo Concertant for clarinet and piano, successors to the concertos and Concertino for Baermann.

Piano Music
Aufforderung zum Tanze (‘Invitation to the Dance’) is a charming programme piece following the progress of an invitation to dance, as a young man escorts his partner to the dance-floor and engages in polite conversation. Weber’s other piano compositions include four sonatas for the instrument, reflecting his own ability as a pianist.