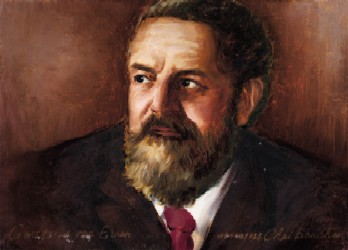 
Gottfried von Einem was among the most distinguished Austrian composers of his generation. Educated in Germany and in England, he was a pupil of Boris Blacher. Much of his music has a tendency towards the neoclassical; his operas are closely associated with the expressionism of the period, as in the work of Schoenberg, Berg, Weill and Hindemith.

Von Einem’s ballet Prinzessin Turandot won him, in 1944, the position of resident composer to the Dresden Staatsoper. His first opera, Dantons Tod (‘Danton’s Death’), based on the work of Büchner, had its first staging in Salzburg in 1947, to be followed in 1953 by Der Prozess (‘The Trial’), based on Kafka. Der Besuch der alten Dame (‘The Visit of the Old Lady’) was written in collaboration with the playwright Dürrenmatt, and Kabale und Liebe (‘Intrigue and Love’) on a text adapted from Schiller. Jesu Hochzeit (‘The Wedding of Jesus’) provoked a predictable scandal.

Von Einem’s orchestral music includes concertos for piano and for violin, together with a Philadelphia Symphony and a Vienna Symphony. His chamber music includes two violin sonatas and a Divertimento based on themes from his opera Der Besuch der alten Dame.