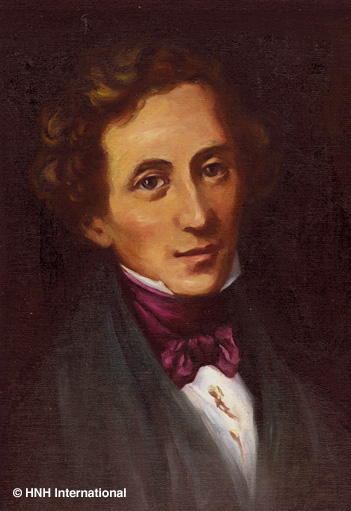 
Felix Mendelssohn, grandson of the distinguished Jewish thinker Moses Mendelssohn, was born in Hamburg, the son of a banker (the additional surname Bartholdy was added to the family name when his parents converted to Christianity). The family moved to Berlin, where Mendelssohn was brought up and able to associate with a cultured circle of family friends. He was associated with the revival of public interest in the music of Johann Sebastian Bach and in the early 1830s travelled abroad for his education, spending time in Italy and also visiting England, Wales and Scotland. He was later conductor of the Gewandhaus Orchestra in Leipzig (where he also established a conservatory), his stay there interrupted briefly by a return to Berlin. He died in Leipzig in 1847. Prolific and precocious, Mendelssohn had many gifts, musically as composer, conductor and pianist. His style of composition combined something of the economy of means of the Classical period with the Romanticism of a later age.

Mendelssohn wrote five symphonies, in addition to an attractive series of twelve early symphonies for strings, completed at the age of fourteen. Of the mature symphonies the ‘Italian’ Symphony, Symphony No. 4, completed in 1833 and reflecting the composer’s experiences in Italy during his Grand Tour, is the most popular, closely followed by Symphony No. 3, the ‘Scottish’, with its echoes of the Palace of Holyrood in the days of Mary Queen of Scots. Symphony No. 5, the ‘Reformation’, written in 1832 to celebrate the third centenary of the Augsburg Confession, is less often heard, as is Symphony No. 2, the choral ‘Lobgesang’, written to mark the fourth centenary of the invention of printing in 1840.

The concert overtures of Mendelssohn include the 1826 overture A Midsummer Night’s Dream, a work in many ways typical of the composer’s deftness of touch in its evocation of the fairy world of the play for which he later wrote incidental music. The Hebrides, otherwise known as ‘Fingal’s Cave’, evokes a visit to Scotland and the sight of the sea surging over the Giant’s Causeway. Meeresstille und glückliche Fahrt (‘Calm Sea and Prosperous Voyage’) is based on a poem by Goethe, a writer who had received the young Mendelssohn at Weimar and prophesied for him a successful career. The overture Ruy Blas, completed in 1839, is based on the play by Victor Hugo.

The best known of Mendelssohn’s concertos must be the Violin Concerto in E minor, the third to make use of the solo violin; it was written in 1844 and first performed in Leipzig the following year. Two piano concertos, the first written in 1831 and the second in 1837, are heard less frequently, and there are earlier concertos for violin, for violin and piano, and for two pianos written between 1822 and 1824.

Mendelssohn wrote his first chamber music at the age of 10. One of the most delightful works is the Octet, for double string quartet, written to celebrate the 23rd birthday of a violinist friend in 1825. Evidence of earlier precocity is heard in the equally fine Sextet for violin, two violas, cello, double bass and piano, written in 1824. The two string quintets and six string quartets may enjoy less general popularity, although they contain many felicities; String Quartet No. 4 in E minor offers a characteristic view of the composer’s command of technique and mood, ranging from the fairy world of the Scherzo to the passion of the Finale. The two late piano trios, in D minor and C minor, represent the composer at his very best.

The 19th century was the age of the piano, a period in which the instrument, newly developed, became an essential item of household furniture and the centre of domestic music-making. Short piano pieces always found a ready market, none more than Mendelssohn’s eight albums of Lieder ohne Worte (‘Songs Without Words’)—a novel title that admirably describes the length, quality and intention of these pieces.

In addition to his other gifts, Mendelssohn was also a proficient and brilliant organist, his interest in the instrument stimulated by his enthusiasm for the work of Bach. He won particular admiration in England for his use of the pedals, an element largely neglected in English organ playing of the time.

Mendelssohn’s music for the theatre includes full incidental music for Shakespeare’s A Midsummer Night’s Dream, written for the new King of Prussia and first used at Potsdam in 1843, preceded by the overture written in 1826. The music typically captures the enchanted fairy world of the play. In connection with the King’s attempts to revive Greek tragedy, Mendelssohn also wrote incidental music for Antigone and Oedipus at Colonus by Sophocles, as well as for Racine’s Athalie. His attempts at opera, which include Camacho’s Wedding, based on an episode from Don Quixote, have generally not survived in modern repertoire.

Mendelssohn wrote a number of works for possible church use, both Protestant and Catholic. Of these the best known must be ‘Hear My Prayer’—a favourite with boy trebles. The carol ‘Hark! The Herald Angels Sing’ was adapted by W.H. Cummings from a chorus in a secular cantata. His oratorios Elijah and St Paul remain traditionally popular with choral societies. In addition to settings of psalms, which include a setting of Psalm 100, Jauchzet den Herrn (‘Praise the Lord’), and sacred and secular cantatas, Mendelssohn wrote a number of songs. These include both choral songs and a larger quantity of solo songs—a pleasing addition to the repertoire of German song and intended for intimate social gatherings rather than the concert hall. Among the most exciting of these is ‘Hexenlied’ (‘Witches’ Song’), a setting of verse by Hölty which is one of an early set of 12 songs written in 1828. A second dozen, published two years later, includes the contrasting ‘Im Frühling’ (‘In the Spring’) and ‘Im Herbst’ (‘In the Autumn’). Mendelssohn wrote his last songs in the year of his death, 1847.

Mendelssohn: Works for Cello and Piano