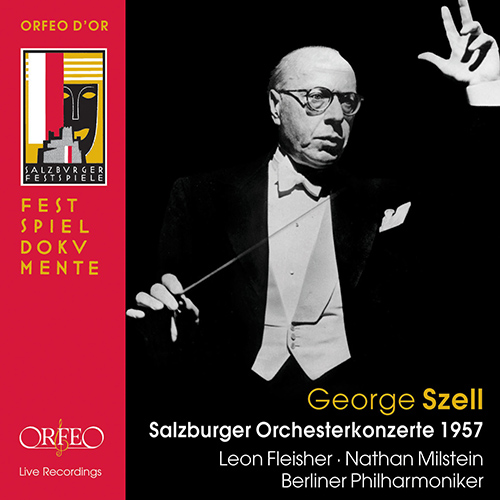 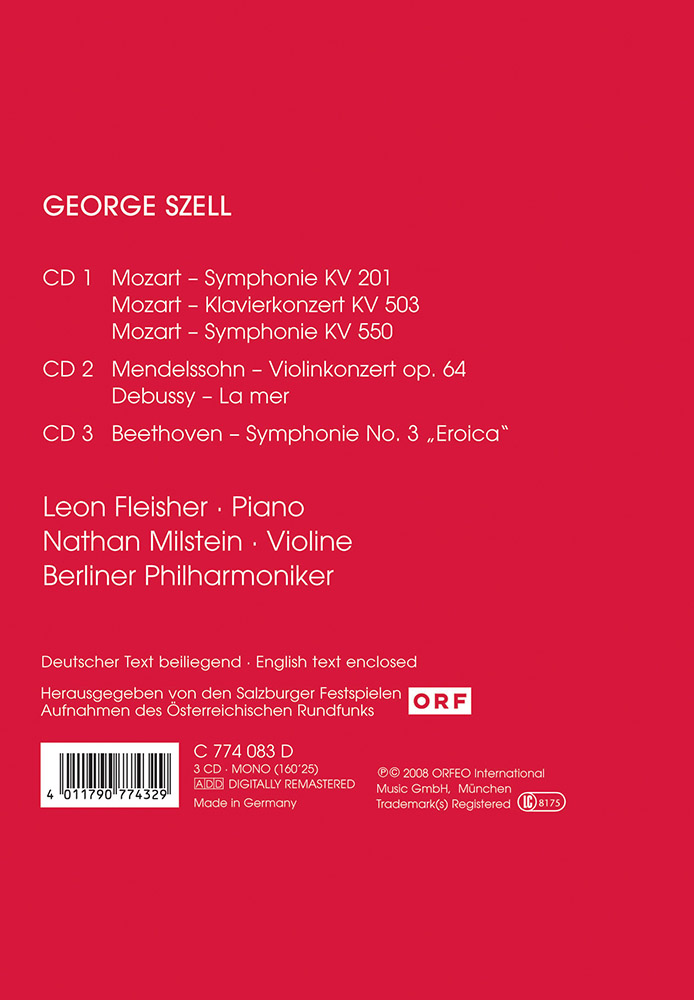 Many of the legendary opera performances and concerts that George Szell conducted in Salzburg are documented on the Orfeo label. To these, we may now add two live recordings of concerts dating from 1957. In the first of them, he is heard with the Berlin Philharmonic, which the Festival’s new artistic director, Herbert von Karajan, had just introduced to Salzburg as its second great symphony orchestra alongside the Vienna Philharmonic. Szell had first conducted the Berlin Philharmonic four decades earlier in Berlin. In 1957 he was originally scheduled to give only one concert with the orchestra at the Mozarteum: an all-Mozart programme comprising the relatively little-known Symphony in A major K 201, the Piano Concerto in C major K 503, with the then twenty-nine-year-old Leon Fleisher making his Salzburg Festival début, his precocious mellowness ideally blending with the astonishingly filigree Mozart style of Szell and the Berlin Philharmonic, and, finally, the famous G minor Symphony K 550. And that should have been that, except that barely a week later Szell was asked to step in at the last minute and rescue a concert in the old Festspielhaus. He conducted the concert without a rehearsal and from memory, beginning with a tempestuously ebullient account of Debussy’s La mer, followed by an extremely delicate, yet never saccharine, reading of Mendelssohn’s Violin Concerto in E minor op. 64, with Nathan Milstein as the soloist. Reversing the planned order of pieces, Szell and the Berlin Philharmonic ended the concert with an acclaimed performance of Beethoven’s Third Symphony, the „Eroica“. Even in the present recording, the listener cannot fail to be astonished by the way in which, through his choice of tempos and through his accents and climaxes, Szell never gives the impression that in spontaneously taking over the concert he had limited himself to only the most basic essentials or, alternatively, that he had taken too great a risk by insisting on his own personal interpretation. Thanks to his wonted precision and perfection but thanks, too, to the unmistakable originality of his imprint as a conductor, the present archival recording affords yet further proof of George Szell’s exceptional status among the leading conductors of the 20th century.