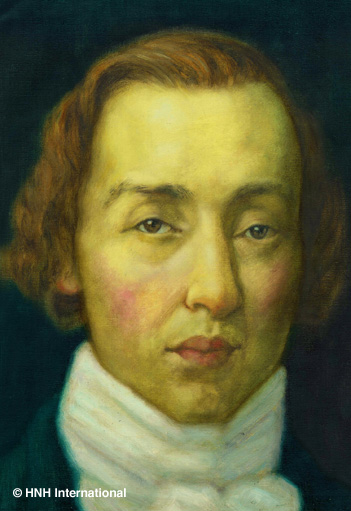 
Born near Warsaw in 1810, the son of a French émigré and a Polish mother, Chopin won early fame in the relatively limited circles of his native country before seeking his fortune abroad, in Paris. His departure from Warsaw coincided with the unsuccessful national uprising against Russian domination, and Chopin found himself in Paris in the company of a number of other Polish exiles. He was able to establish himself as a pianist and as a teacher of the piano, primarily in fashionable society. For some ten years Chopin enjoyed a liaison with the writer George Sand, but he broke with her during the last years of his life, which was brought to a close by the tuberculosis from which he had long suffered. His compositions, principally for the piano, make a remarkable use of the newly developed instrument, exploring its poetic possibilities while generally avoiding the more obvious ostentation of the Paris school of performers.

As a young musician embarking on a career as a pianist, Chopin provided himself with half a dozen works for piano and orchestra, a form for which he later found no necessity. These include two piano concertos, three works based on Polish themes, a fantasia, a Krakowiak and a grand polonaise, and a set of variations on a theme by Mozart.

Chopin wrote his Introduction and Polonaise brillante for cello and piano for an early patron, and towards the end of his life he wrote a cello sonata. His G minor Piano Trio is a valuable addition to recital repertoire.

Chopin created or developed a number of new forms of piano music, vehicles for his own poetic use of the instrument, with its exploration of nuance, its original harmonies and its discreet but often considerable technical demands. He used the popular form of the waltz in a score of such compositions, of which the so-called Minute Waltz is probably the best known of many of almost equal familiarity. A Polish dance, the polonaise, elevated from village to ballroom, provided the basis of another characteristic form in sixteen such works, written between 1817, when Chopin was seven, and 1846. The best known, among generally familiar works, are the Polonaise in A major, Op 40, No 1, the Polonaise in A flat, Op 53, and the Polonaise-Fantaisie, Op 61. Other Polish dances used by Chopin include the 62 mazurkas. The four ballades are supposedly based on patriotic poems by Chopin’s friend Mickiewicz, evocative narrative works with no precise extra-musical association. The 21 nocturnes continue an evocative form initiated by the Irish pianist John Field. Chopin wrote 26 preludes, 24 of them completed during an ill-fated winter with George Sand in Mallorca, and 27 études, of which the Revolutionary Étude is perhaps the best known. Other compositions include four scherzos, expansions of the earlier form into a more extended virtuoso piece, three sonatas, a berceuse, a barcarolle, four impromptus and a number of other works. The whole body of Chopin’s music is of the greatest musical and technical importance, melodies often of operatic inspiration and harmonies and forms of considerable originality.

Life and Works of Chopin