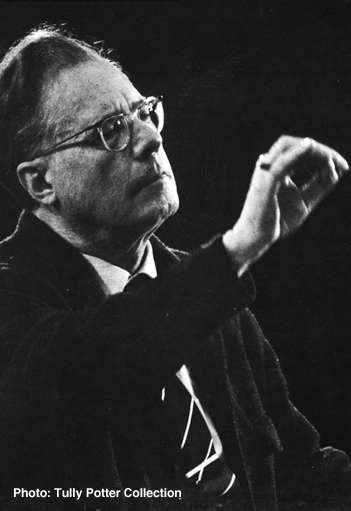 Karl Böhm was born in Graz in Austria of German-Bohemian descent through his father (Böhm may be translated as meaning ‘Bohemian’), and of French-Alsatian lineage on his mother’s side. His uncle, General Stiger-Steiner, had been a Minister for War in the Austrian government, while his father was a lawyer and, although an active amateur musician and friend of the conductor Hans Richter, believed that if his son wished to pursue a musical career he should also possess a professional qualification. Thus Böhm studied law at the University of Graz, while also taking lessons in piano and theory at the Graz Conservatory. He went on to study at the Vienna Conservatory between 1913 and 1914 with Eusebius Mandyczewski, who had been a close colleague of Brahms, and with Guido Adler. Böhm served in the Austrian army during World War I, returning to civilian life after sustaining an injury. He continued his twin-track career, on the one hand working as a répétiteur from 1917 at the Graz Opera and on the other continuing his legal studies, receiving a doctorate in law from the University of Graz in 1919.

Böhm did not have any formal training as a conductor, acknowledging Richter’s belief that he would know immediately if he had the capability to succeed in this profession simply by standing in front of an orchestra. He made his conducting debut in 1917 at the Graz Opera with Victor Nessler’s now forgotten Der Trompeter von Säckingen. In 1919 he was appointed as first conductor at Graz, giving up law altogether, and in the following year he was made chief conductor at Graz. While conducting an intensively prepared performance there of Lohengrin he was heard by the distinguished German conductor Karl Muck, who offered to coach him in the music of Wagner. With Muck Böhm studied the Ring cycle, Parsifal, Tristan und Isolde, and Die Meistersinger. This tutelage stood Böhm in good stead, especially in relation to Tristan, a work with which he was to become closely identified. Muck also recommended him to Bruno Walter, at this time general music director at the Munich Opera and one of the most important younger conductors in Germany.

Walter engaged Böhm as an assistant and he remained in Munich for six years, from 1921 to 1927. He later described this experience, of being an assistant conductor in a first-rate opera company, as being a vital element in his education. In Munich Böhm worked initially with Walter and later with Hans Knappertsbusch, and he conducted five hundred and twenty-eight performances there of seventy-three different operas. In 1927 he was appointed chief conductor at the Darmstadt Opera where he stayed until 1931. Here he was noted for his championing of contemporary music, in 1928 presenting Berg’s opera, Wozzeck, with the composer attending the final day of rehearsals. Böhm was to become as famous for his interpretations of Berg’s two operas as he was for his Wagner performances.

In 1931 he moved to Hamburg, again as chief conductor at the opera, succeeding Egon Pollak. A year of great significance followed for Böhm in 1933. Firstly he met Richard Strauss, when the composer came to Hamburg to assist in the preparation of performances of his opera Arabella. The two developed a close relationship that was to last for the remainder of Strauss’s life, and through Strauss Böhm developed a deep understanding of Mozart. During this period Bohm had also been building up his concert career, for instance with the Vienna Symphony Orchestra. In April 1933 Clemens Krauss resigned from the Vienna Philharmonic as conductor and Böhm stepped into the breach for a concert. He also conducted Tristan und Isolde at the Vienna State Opera. This was to be the beginning of a significant musical partnership with the Vienna Philharmonic Orchestra that was to last until Böhm’s death. Finally in 1933, following his debut at the Dresden Opera, he was invited to succeed Fritz Busch as chief conductor, with effect from 1934. He stayed at Dresden until 1943, enjoying excellent working conditions with a fine roster of singers and an orchestra of exceptional quality. Here his friendship with Strauss deepened: he conducted the premières of Die schweigsame Frau in 1935 and of Daphne, which Strauss dedicated to him, in 1938. In 1936 Strauss, Böhm and the Dresden company made a very successful visit to England, and in 1938 Böhm made his first appearance at the Salzburg Festival, conducting Don Giovanni. During this period he also made a series of very distinguished recordings for the German gramophone company Electrola, which covered both the operatic and the concert repertoires.

At the beginning of 1943 Böhm took over as chief conductor of the Vienna State Opera, where he maintained and developed the high standards of the company, as many contemporary radio recordings attest. The performance of Ariadne auf Naxos arranged to celebrate Strauss’s eightieth birthday in 1944 probably marks the high point musically, if not politically, of Böhm’s first Viennese period. With the collapse of Germany and the Allied victory at the end of World War II, he was forbidden to conduct in Germany and Austria until 1947. However he gradually rebuilt his conducting career in Europe and between 1950 and 1953 was responsible for the German repertoire at the Teatro Colón in Buenos Aires. In 1954 he was preferred to his rival Clemens Krauss for the post of chief conductor at the Vienna State Opera, and he opened the rebuilt opera house in 1955 with an incandescent performance of Beethoven’s Fidelio. His second period at the helm in Vienna did not last long: he resigned in 1956 in the face of intense criticism for his absences from the city.

Henceforth Böhm was to hold no further permanent musical posts, preferring to guest-conduct exclusively. In 1957 he was engaged by Rudolf Bing, who had worked with him previously at Darmstadt, to appear at the Metropolitan Opera, New York. He made his debut in October that year with Don Giovanni, which was highly praised. Later he was to conduct many notable productions at the Met, including Die Frau ohne Schatten, Die Meistersinger and Wozzeck. In 1962 he appeared at the Bayreuth Festival conducting a powerful interpretation of Tristan, which was followed by Die Meistersinger in 1964, and by Der Ring des Nibelungen in 1965. In 1970 he was named as general music director of Austria and in 1977 as president of the London Symphony Orchestra, with whom he had appeared at the Salzburg Festival. Throughout this period he was active as a guest conductor with orchestras such as the Berlin Philharmonic, the Berlin Radio Symphony, the London Symphony, the Dresden Staatskapelle, the Vienna Symphony, and the Vienna Philharmonic. He also was very active in the recording studio, recording for several labels, most notably Deutsche Grammophon. In 1981 he suffered a stroke from which he never fully recovered, dying in August of that year in Salzburg.

Böhm was a precise and undemonstrative conductor from whom any form of musical exaggeration was rare in performance. As with many great conductors the essential work had been done earlier in rehearsal, where he was found by many orchestras to be a hard, if ultimately fair, taskmaster, able to draw performances of great refinement and strength from the ensembles with which he worked. His discography is huge, and contains many exceptional performances. Of particular note are his recordings of Strauss’s opera Die Frau ohne Schatten for Decca, Mozart’s opera Così fan tutte made with Walter Legge and the Philharmonia Orchestra, and his Beethoven and Mozart symphony cycles made with the Vienna and Berlin Philharmonic Orchestras respectively for Deutsche Grammophon. His pre-war recording of the third act of Die Meistersinger remains an outstanding musical document, as do his recordings from all periods of the symphonies of Bruckner.