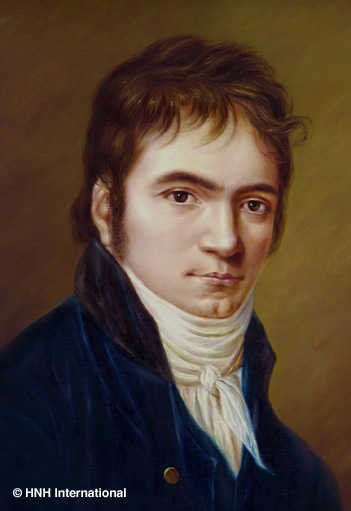 
Born in Bonn in 1770, the eldest son of a singer in the Kapelle of the Archbishop-Elector of Cologne and grandson of the Archbishop’s Kapellmeister, Beethoven moved in 1792 to Vienna. There he had some lessons from Haydn and others, quickly establishing himself as a remarkable keyboard player and original composer. By 1815 increasing deafness had made public performance impossible and accentuated existing eccentricities of character, patiently tolerated by a series of rich patrons and his royal pupil the Archduke Rudolph. Beethoven did much to enlarge the possibilities of music and widen the horizons of later generations of composers. To his contemporaries he was sometimes a controversial figure, making heavy demands on listeners by both the length and the complexity of his writing, as he explored new fields of music.

Although he contemplated others, Beethoven wrote only one opera. This was eventually called Fidelio after the name assumed by the heroine Leonora, who disguises herself as a boy and takes employment at the prison in which her husband has been unjustly incarcerated. This escape opera, for which there was precedent in contemporary France, ends with the defeat of the evil prison governor and the rescue of Florestan, testimony to the love and constancy of his wife Leonora. The work was first staged in 1805 and mounted again in a revised performance in 1814, under more favourable circumstances. The ballet The Creatures of Prometheus was staged in Vienna in 1801, and Beethoven wrote incidental music for various other dramatic productions, including Goethe’s Egmont, von Kotzebue’s curious The Ruins of Athens, and the same writer’s King Stephen.

Beethoven’s most impressive choral work is the Missa solemnis, written for the enthronement of his pupil Archduke Rudolph as Archbishop of Olmütz (Olomouc) although finished too late for that occasion. An earlier work, the oratorio Christ on the Mount of Olives, is less well known. In common with other composers, Beethoven wrote a number of songs. Of these the best known are probably the settings of Goethe, which did little to impress the venerable poet and writer (he ignored their existence), and the cycle of six songs known as An die ferne Geliebte (‘To the Distant Beloved’). The song ‘Adelaide’is challenging but not infrequently heard.

Beethoven completed nine symphonies, works that influenced the whole future of music by the expansion of the traditional Classical form. The best known are Symphony No. 3, ‘Eroica’, originally intended to celebrate the initially republican achievements of Napoleon; No. 5; No. 6, ‘Pastoral’; and No. 9, ‘Choral’. The less satisfactory ‘Battle Symphony’ celebrates the earlier military victories of the Duke of Wellington.

For the theatre and various other occasions Beethoven wrote a number of overtures, including four for his only opera, Fidelio (one under that name and the others under the name of the heroine, Leonora). Other overtures include Egmont, Coriolan, Prometheus, The Consecration of the House and The Ruins of Athens.

Beethoven completed one violin concerto and five piano concertos, as well as a triple concerto for violin, cello and piano, and the curious Choral Fantasy for solo piano, chorus and orchestra. The piano concertos were for the composer’s own use in concert performance. No. 5, the so-called ‘Emperor’ Concerto, is possibly the most impressive. The single Violin Concerto, also arranged for piano, is part of the standard violin repertoire along with two romances (possible slow movements for an unwritten violin concerto).

Beethoven wrote 10 sonatas for violin and piano, of which the ‘Spring’ and the ‘Kreutzer’ are particular favourites with audiences. He extended very considerably the possibilities of the string quartet. This is shown even in his first set of quartets, Op. 18, but it is possibly the group of three dedicated to Prince Razumovsky (the ‘Razumovsky’ Quartets, Op. 59) that are best known. The later string quartets offer great challenges to both players and audience, and include the remarkable Grosse Fuge—a gigantic work, discarded as the final movement of the String Quartet, Op. 130, and published separately. Other chamber music includes a number of trios for violin, cello and piano, with the ‘Archduke’ Trio pre-eminent and the ‘Ghost’ Trio a close runner-up, for very different reasons. The cello sonatas and sets of variations for cello and piano (including one set based on Handel’s ‘See, the conqu’ring hero comes’ from Judas Maccabaeus and others on operatic themes from Mozart) are a valuable part of any cellist’s repertoire. Chamber music with wind instruments and piano include the Quintet, Op. 16, for piano, oboe, clarinet, horn and bassoon. Among other music for wind instruments is the very popular Septet, scored for clarinet, horn, bassoon, violin, viola, cello and double bass, as well as a trio for two oboes and cor anglais, and a set of variations on a theme from Mozart’s Don Giovanni for the same instruments.

Beethoven’s 32 numbered piano sonatas make full use of the developing form of the piano, with its wider range and possibilities of dynamic contrast. Other sonatas not included in the 32 published by Beethoven are earlier works, dating from his years in Bonn. There are also interesting sets of variations, including a set based on ‘God Save the King’and another on ‘Rule, Britannia’, variations on a theme from the ‘Eroica’ Symphony, and a major work based on a relatively trivial theme by the publisher Diabelli. The best known of the sonatas are those that have earned themselves affectionate nicknames: the ‘Pathétique’, ‘Moonlight’, ‘Waldstein’, ‘Appassionata’, ‘Les Adieux’ and ‘Hammerklavier’. Less substantial piano pieces include three sets of bagatelles, the all too well-known Für Elise, and the Rondo a capriccio, known in English as ‘Rage Over a Lost Penny’.

Famous composers like Haydn and Mozart were also employed in the practical business of providing dance music for court and social occasions. Beethoven wrote a number of sets of minuets, German dances and contredanses, ending with the so-called Mödlinger Dances, written for performers at a neighbouring inn during a summer holiday outside Vienna.