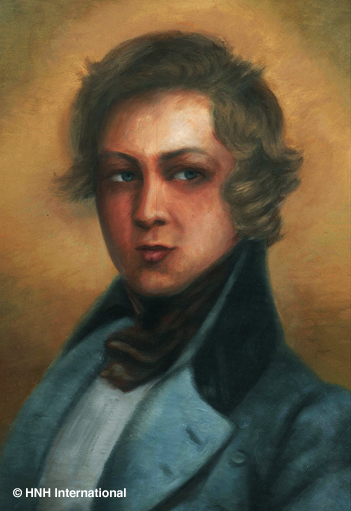 
The son of a bookseller, publisher and writer, Robert Schumann showed early abilities in both music and literature, the second facility used in his later writing on musical subjects. After brief study at university, he was allowed by his widowed mother and guardian to undertake serious study of the piano with Friedrich Wieck, whose favourite daughter Clara was later to become Schumann’s wife. His ambitions as a pianist were thwarted by a weakness in the fingers of one hand, but the 1830s nevertheless brought a number of compositions for the instrument. The year of his marriage, 1840, was a year of song, followed by attempts in which his young wife encouraged him at more ambitious forms of orchestral composition. Settling first in Leipzig and then in Dresden, the Schumanns moved in 1850 to Düsseldorf, where Schumann had his first official appointment, as municipal director of music. In 1854 he had a serious mental breakdown, followed by two years in the asylum at Endenich before his death in 1856. As a composer Schumann’s gifts are clearly heard in his piano music and in his songs.

Schumann completed four symphonies, after earlier unsuccessful attempts at the form. The first, written soon after his marriage and completed early in 1841, is known as ‘Spring’ and has a suggested programme. His Second Symphony followed in 1846, and the Third Symphony, ‘Rhenish’, a celebration of the Rhineland and its great cathedral at Cologne, was written in Düsseldorf in 1850. Symphony No. 4 was in fact an earlier work, revised in 1851 and first performed in Düsseldorf in 1853. The Overture, Scherzo and Finale, Op. 52 was described by the composer as a ‘symphonette’.

Schumann’s only completed piano concerto was started in 1841 and finished in 1845. The Cello Concerto of 1850 was first performed four years after Schumann’s death, while the 1853 Violin Concerto had to wait over 80 years before its first performance in 1937. The Konzertstück for four French horns is an interesting addition to orchestral repertoire, and his Introduction and Allegro for piano and orchestra was completed in 1853.

Schumann’s only completed opera, Genoveva, was unsuccessful in the theatre, but its overture holds a place in concert-hall repertoire, along with an overture to Byron’s Manfred, again first intended for the theatre. Concert overtures include Die Braut von Messina (‘The Bride from Messina’), based on Schiller’s play of that name; Julius Cäsar, based on Shakespeare; and Hermann und Dorothea, based on Goethe. A setting of scenes from Goethe’s Faust also includes an overture.

Schumann wrote three string quartets in 1842, a fertile period that also saw the composition of a piano quintet and a piano quartet. Other important chamber music by Schumann includes three piano trios, three violin sonatas, and a number of shorter character pieces that include the Märchenbilder for viola and piano, collections of Phantasiestücke with alternative instrumentation, the Fünf Stücke im Volkston for cello (or violin) and piano, and other short pieces generally suggesting a literary or otherwise extra-musical programme.

Schumann wrote a number of part-songs for mixed voices, for women’s voices and for men’s voices, including four collections of Romanzen und Balladen and two of Romanzen for women’s voices. His choral works with orchestra include Scenes from Goethe’s Faust; Das Paradies und die Peri, based on Thomas Moore’s poem Lalla Rookh; and Requiem for Mignon, based on Goethe’s novel Wilhelm Meister. In his final years he wrote a Mass and a Requiem. The solo songs of Schumann offer a rich repertoire and are an important addition to the body of German Lieder. From these many settings mention may be made of the collections and song cycles Myrthen, Op. 25, Liederkreis, Op. 39, Frauenliebe und -leben, Op. 42, and Dichterliebe, Op. 48, all written in the ‘Year of Song’, 1840.

The piano music of Schumann, whether written for himself, for his wife, or, in later years, for his children, offers a wealth of material. From the earlier period comes Carnaval—a series of short musical scenes with motifs derived from the letters of the town of Asch; this was the home of a fellow student of Friedrich Wieck called Ernestine von Fricken, to whom Schumann was briefly engaged. The same period brought the Davidsbündlertänze (‘Dances of the League of David’), a reference to the imaginary league of friends of art against the surrounding Philistines. This decade also brought the first version of the monumental Symphonic Studies (based on a theme by the father of Ernestine von Fricken) and the well-known Kinderszenen (‘Scenes of Childhood’). Kreisleriana has its literary source in the Hoffmann character Kapellmeister Kreisler, Papillons (‘Butterflies’) has a source in the work of the writer Jean Paul, and Noveletten has a clear literary reference in the very title. Later piano music by Schumann includes the Album für die Jugend (‘Album for the Young’) of 1848, Waldszenen (‘Forest Scenes’) of 1849, and the collected Bunte Blätter (‘Coloured Leaves’) and Albumblätter (‘Album Leaves’) drawn from earlier work.