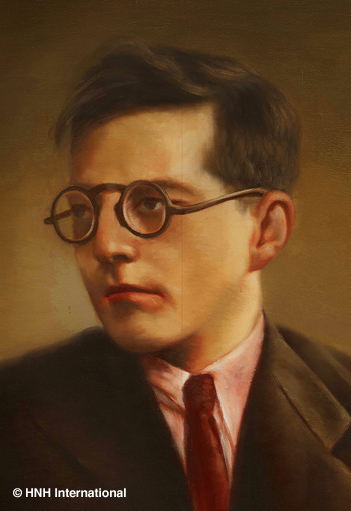 
Dmitry Shostakovich belongs to the generation of Russian composers trained principally after the Communist Revolution of 1917. He graduated from the Petrograd Conservatory as a pianist and composer, his First Symphony winning immediate favour. His subsequent career in Russia varied with the political climate. The initial success of his opera Lady Macbeth of the Mtsensk District, based on Leskov and later revised as Katerina Ismailova, was followed by official condemnation, emanating apparently from Stalin himself. The composer’s Fifth Symphony, in 1937, brought partial rehabilitation, while the war years saw a propaganda coup in the Symphony No. 7, ‘Leningrad’, performed in the city under German siege. In 1948 he fell afoul of the official musical establishment with his Ninth Symphony, thought to be frivolous, but he enjoyed the relative freedom following the death of Stalin in 1953. Shostakovich outwardly and inevitably conformed to official policy, but posthumous information suggests that he remained very critical of Stalinist dictates, particularly with regard to music and the arts. He occupies a significant position in the 20th century as a symphonist and as a composer of chamber music, writing in a style that is sometimes spare in texture but always accessible, couched as it is in an extension of traditional tonal musical language.

Katerina Ismailova remains the principal opera of Shostakovich, other notable works being the early opera The Nose, based on Gogol, and the ballet The Golden Age. Incidental music for the theatre includes scores for Shakespeare’s Hamlet and for King Lear, the same two plays being among the films for which he wrote scores.

The 15 symphonies of Shostakovich range in scope from the First Symphony of 1925, a graduation composition, to the embittered Thirteenth, which uses Yevtushenko’s poems. The Fourteenth, which contains settings of various poems, came two years before the Fifteenth and last symphony of 1971. The Fifth Symphony, the immediate post-war Ninth, and the Tenth of 1953 are most often heard, while the Second and Third, with the Eleventh and Twelfth, have more overtly patriotic suggestions about them.

Shostakovich wrote an early concerto for piano, trumpet and strings, and a second piano concerto in 1957 as a vehicle for his son, Maxim. He wrote two violin concertos and two cello concertos.

Shostakovich arranged concert suites from many of his film and theatre scores.

Choral works by Shostakovich include The Execution of Stepan Razin, a setting of a text by Yevtushenko. His solo songs are generally less overtly political, evidence of a private rather than public voice.

The 15 string quartets by Shostakovich form a remarkable body of work, lucid in texture, often moving in musical content. The intensely felt Viola Sonata of 1975 is the third of his duo sonatas, preceded by the 1934 Cello Sonata and the Violin Sonata of 1968. To these may be added two piano trios and the G minor Piano Quintet, written in 1944.