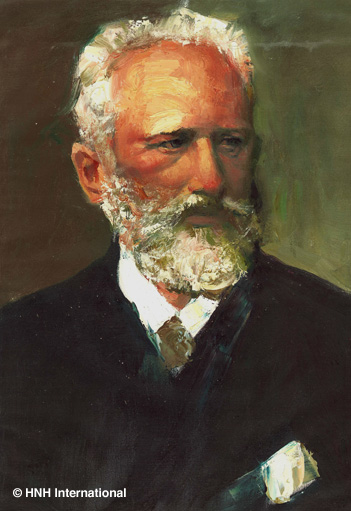 
Tchaikovsky was one of the earlier students of the St Petersburg Conservatory established by Anton Rubinstein, completing his studies there to become a member of the teaching staff at the similar institution established in Moscow by Anton Rubinstein’s brother, Nikolay. He was able to withdraw from teaching when a rich widow, Nadezhda von Meck, offered him financial support; this support continued for much of his life, although, according to the original conditions of the pension, they never met. Tchaikovsky was a man of neurotic diffidence, his self-doubt increased by his homosexuality. It has been suggested by some that an impending scandal caused him to take his own life at a time when he was at the height of his powers as a composer, although others have found this improbable. His music is thoroughly Russian in character, but, although he was influenced by Balakirev and the ideals of the Russian nationalist composers ‘The Five’, he may be seen as belonging rather to the more international school of composition fostered by the Conservatories that Balakirev, leader of ‘The Five’, so much deplored.

Two above all of Tchaikovsky’s operas have retained a place in international repertoire. Eugene Onegin, based on a work by Pushkin, was written in 1877, the year of the composer’s disastrous and brief attempt at marriage. He returned to Pushkin in 1890 with his powerful opera The Queen of Spades.

Tchaikovsky, a master of the miniature forms necessary for ballet, succeeded in raising the quality of the music provided for an art that had undergone considerable technical development in 19th-century Russia under the guidance of the French choreographer Marius Petipa. The first of Tchaikovsky’s full-length ballet scores was Swan Lake, completed in 1876, followed in 1889 by The Sleeping Beauty. His last ballet, based on a story by E.T.A. Hoffmann, was The Nutcracker, first staged in St Petersburg in December 1892.

Tchaikovsky wrote six symphonies. The First Symphony, sometimes known as ‘Winter Daydreams’, was completed in its first version in 1866 but later revised. No. 2, the so-called ‘Little Russian’, was composed in 1872 but revised eight years later. Of the other symphonies, No. 5, with its motto theme and waltz movement in the place of a scherzo, was written in 1888, while the last completed symphony, known as the ‘Pathétique’, was first performed under Tchaikovsky’s direction shortly before his death in 1893.

Fantasy Overtures and other works

Tchaikovsky turned to literary and dramatic sources for a number of orchestral compositions. Romeo and Juliet, his first fantasy overture after Shakespeare, was written in 1869 and later twice revised. Burya is a symphonic fantasia inspired by The Tempest, and the last of the Shakespearean fantasy overtures, Hamlet, was written in 1888. Francesca da Rimini translates into musical terms the illicit love of Francesca and Paolo, as recounted in Dante’s Inferno, and Manfred, written in 1885, draws inspiration from the poem of that name by Byron. The Voyevoda is described as a symphonic ballad and is based on a poem by Mickiewicz. Other, smaller-scale orchestral compositions include the Serenade for strings, the popular Italian Capriccio, and, rather less well known, four orchestral suites. Tchaikovsky thought little of his 1812 overture, with its patriotic celebration of victory against Napoleon 70 years before, while Marche slave had a topical patriotic purpose. Souvenir de Florence, originally for string sextet, was completed in 1892 in its final version.

The first of Tchaikovsky’s three piano concertos has become the most generally popular of all Romantic piano concertos. The second is not so well known, while the third, started in 1893, consists of a single movement, Allegro de concert. Tchaikovsky’s single violin concerto, rejected as being too difficult by the leading violinist in Russia, Leopold Auer, later found a firm place in repertoire. For solo cello Tchaikovsky wrote the Variations on a Rococo Theme and the Pezzo capriccioso. Shorter pieces for violin and orchestra include the Sérénade mélancholique and the Valse-scherzo. Souvenir d’un lieu cher, written as an expression of gratitude for hospitality to Madame von Meck, was originally for violin and piano.

Tchaikovsky provided a quantity of music for the piano, particularly in the form of shorter pieces suited to the lucrative amateur market. Collections published by the composer include The Seasons, a set of 12 pieces (one for each month), and several sets of pieces with varying degrees of difficulty.

Tchaikovsky wrote a considerable quantity of songs and duets, including settings of Goethe’s Mignon songs as well as of less distinguished verse by his contemporaries. His choral works include the 1878 Liturgy of St John Chrysostom and a number of other settings, many of them for unaccompanied voices, of sacred and secular texts.

Tchaikovsky: Eugen Onegin - The Maid of ...

Tchaikovsky: Symphony No. 5; Hamlet Over...