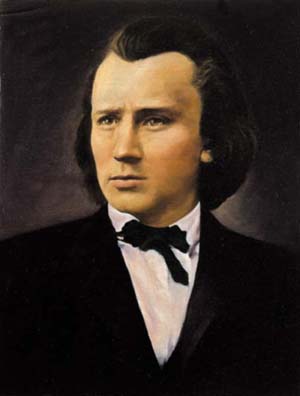 
Born in Hamburg, the son of a double bass player and his older seamstress wife, Brahms attracted the attention of Schumann, to whom he was introduced by the violinist Joachim. After Schumann’s death he maintained a long friendship with the latter’s widow, the pianist Clara Schumann, whose advice he always valued. Brahms eventually settled in Vienna, where to some he seemed the awaited successor to Beethoven. His blend of Classicism in form with a Romantic harmonic idiom made him the champion of those opposed to the musical innovations of Wagner and Liszt. In Vienna he came to occupy a position similar to that once held by Beethoven, his gruff idiosyncrasies tolerated by those who valued his genius.

Brahms wrote four symphonies, massive in structure, and all the result of long periods of work and revision. The two early serenades have their own particular charm, while Variations on a Theme by Haydn—in fact the St Anthony Chorale, used by that composer—enjoys enormous popularity, as it illustrates a form of which Brahms had complete mastery. A pair of overtures—the Academic Festival Overture and the Tragic Overture—and arrangements of his Hungarian Dances complete the body of orchestral music without a solo instrument. His concertos consist of two magnificent and demanding piano concertos, a violin concerto and a splendid double concerto for violin and cello.

Brahms completed some two dozen pieces of chamber music, and almost all of these have some claim on our attention. For violin and piano there are three sonatas, Opp 78, 100 and 108, with a separate Scherzo movement for a collaborative sonata he wrote with Schumann and Dietrich for their friend Joachim. For cello and piano he wrote two fine sonatas: Opp 38 and 99. There are two late sonatas, written in 1894, for clarinet/viola and piano, Op 120, each version deserving attention, as well as the Clarinet Trio, Op 114, for clarinet, cello and piano, and the Clarinet Quintet, Op 115, for clarinet and string quartet, both written three years earlier. In addition to this, mention must be made of the three piano trios, Opp 8, 87 and 101; the Horn Trio, Op 40 for violin, horn and piano; three piano quartets, Opp 25, 26 and 60; the Piano Quintet, Op 34; and three string quartets, Opp 51 and 67. Two string sextets, Opp 18 and 36, and two string quintets, Opp 88 and 111, complete the list.

If all the chamber music of Brahms should be heard, the same may be said of his music for piano. Brahms showed a particular talent for the composition of variations, and this is aptly demonstrated in the famous Variations on a Theme by Handel, Op 24, with which he made his name at first in Vienna, and the ‘Paganini’ Variations, Op 35, based on the theme of the great violinist’s Caprice No. 24. Other sets of variations show similar skill, if not the depth and variety of these major examples of the art. Four Ballades, Op 10, include one based on a real Scottish ballad, Edward, a story of parricide. The three piano sonatas, Opp 1, 2 and 5, relatively early works, are less well known than the later piano pieces, Opp 118 and 119, written in 1892, and the Fantasias, Op 116, of the same year. Music for four hands, either as duets or for two pianos, includes the famous Hungarian Dances (often heard in orchestral and instrumental arrangement) and a variety of original compositions and arrangements of music better known in orchestral form.

There is again great difficulty of choice when we approach the large number of songs written by Brahms, which were important additions to the repertoire of German Lied (art song). The Liebeslieder Waltzes, Op 52, for vocal quartet and piano duet are particularly delightful, while the solo songs include the moving Four Serious Songs, Op 121, reflecting preoccupations as his life drew to a close. ‘Wiegenlied’ (‘Cradle Song’) is one of a group of five songs, Op 49; the charming ‘Vergebliches Ständchen’ (‘Vain Serenade’) appears in the later set Five Romances and Songs, Op 84, and there are two particularly wonderful songs for contralto, viola and piano, Op 91: ‘Gestillte Sehnsucht’ (‘Tranquil Yearning’) and the Christmas ‘Geistliches Wiegenlied’ (‘Spiritual Cradle-Song’), Op 91, based on the carol ‘Josef, lieber Josef mein’(‘Joseph dearest, Joseph mine’).

Major choral works by Brahms include the monumental A German Requiem, Op 45, a setting of biblical texts; the Alto Rhapsody, Op 53, with a text derived from Goethe; the Schicksalslied (‘Song of Destiny’), Op 54 (a setting of Hölderlin); and a series of accompanied and unaccompanied choral works, written for the choral groups with which he was concerned in Hamburg and in Vienna.

Klavierkonzert No. 2 / Symphonie No. 4